There. I’ve said it. I’ve dared to suggest not using social media. But before I get thrown out of the Marketing Club for daring to speak ill of social media – let me just clarify…

Yes social media is an exciting new channel and a great way of communicating with many different audiences but just because a social media channel exists, it doesn’t mean you should be using it. If you’re sitting there trying to work out how to use [insert latest social media tool here] then maybe the answer is more simple than you think. You shouldn’t. Not every social media channel is right for your company, organisation or brand.

Yet it still puzzles me why some marketers rush to embrace ‘the next big thing’, not because it’s right for the brand, the company or the objective at hand but because ‘everyone else is doing it’. And when they do utilise that next big thing, they don’t tend to do a great job of it. Why? Because the focus is on ‘doing something’ rather than ‘doing the right thing’.

For those of us who can remember that far back, we saw this with the birth of websites where a plethora of badly laid out, badly designed sites appeared that did nothing for the brand and were simply an online version of an organisation’s printed brochure. But the rush to get online was insatiable. More recently we’ve seen QR codes appearing in the most bizarre of places – from revolving posters to the side of buses. Now, as tempted as I am to access a website via a QR code, I’m not running down Oxford Street, smartphone outstretched, in pursuit of the number 55 or loitering at a poster site waiting for said poster to appear again. There seems to be a rush to use these things without really thinking them through and social media is no different.

This is where I suggest we take inspiration, and dare I say direction, from a somewhat unusual source in marketing intelligence – the 1993 film, Jurassic Park.

There is a key point in the film, the part where everything goes a little bit wrong – security fences fail, dinosaurs escape, people get eaten – when Jeff Goldblum’s character, in response to the accusation of being anti-progress, states that they “were so preoccupied with whether or not they could, they didn’t stop to think if they should”.

For me this is the killer question when it comes to any company approaching its social media strategy but one that rarely gets asked.

When I’ve spoken to companies about their social media activity it strikes me that many are ‘doing’ social media but not really sure why. They have a Twitter account – but aren’t really sure if they are using it right. They have a LinkedIn page – but aren’t sure what they are supposed to do with it. They have a Facebook page – it’s blank and they’re not really sure why they’ve got one. One may ask why so many people are rushing ahead with execution without any clear strategy, guidelines or purpose? It seems madness. But as this is their social media presence these questions of strategy and purpose are just glossed over because… well… because we have to have a Facebook page don’t we? Well actually no, you don’t.

So, before rushing off to set up your page on Facebook, LinkedIn, Pinterest or any number of social sites, first ask yourself the Jurassic Park question: yes you can set up the page, but should you? What exactly are you trying to achieve and is it right for your audience, your business and your brand?

We’ve all heard people talk about how the Internet has made everything move faster. When something dramatic happens (whether it’s a crisis or a cause for celebration) it travels quickly around personal networks, industries and even the world.

Marketers often see this as dangerous. The watchmen guarding your brand must be vigilant and ready to react the minute they hear the slightest whisperings of a problem. Those that don’t notice, fail to act quickly or react badly are punished heavily by customers.

But the Internet as a real time gauge of feeling can be positive, amazing and ultimately useful for marketers. When Christian Hernandez from Facebook spoke at The Economist Big Rethink event earlier this month, he described seeing Facebook behaviour during the World Cup. When they tracked the word ‘goal’ in status updates they could literally see millions of people around the world shouting goal through social media. This is a nice image, taking the traditional goal celebration shared between football fans and the people in their living room or a bar and connecting it to an even bigger network.

Another example of the benefit of realtime was shown by Håkan Thyr from Bazaarvoice when he spoke at eCircle Connect Europe conference (see Myles Davidson from I-kos blog here for more on this event). He showed how Dell uses reviews as a crucial component in product management and R&D. At a time when Dell was being criticized heavily, the company decided to set a goal that all their products should be getting a rating of at least 4.5 out of 5. When the project started they were getting 3.7 average.

Developers trawled the reviews for insight and changed their products accordingly. In order to maintain the high standard, new products are given a set time on the market and if they are rated as 3.5 upwards reviews are used to adjust the product. Lower scoring products are simply dropped altogether. This whole process has sped up the process of product development, customer feedback and product assessment compared to traditional evaluations through focus groups. By doing this Dell has moved away from the ‘Dell hell’ tag and re-built its reputation for quality products.

Today, as the UK budget is announced, whilst journalists are interviewing experts for newspaper articles and TV slots, the coalition government will be able to see a much more instant reaction through twitter, forums and social media. They may not be able to react instantly or even do anything with that information in the next few months, but they still have the ability to listen in on the instant reaction which offers new opportunities and possibilities. 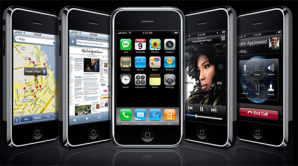 If you thought the hype surrounding the iPhone was starting to settle, you’d be wrong. Like a laptop in your hand, there is something for everyone, with everything you need in one place.

Since its first release in July 2007 the Apple iPhone has been a hot commodity. Now, less than three years since its debut, hardly a day goes past without a new iPhone application popping up, attracting attention from consumers, brands and marketers alike.  My personal favourite has to be the retail apps.

Oasis was the first retailer to launch an iPhone application last summer allowing consumers to shop on the move, view latest collections and track down their closest store. It wasn’t long before other big names including Ikea and Warehouse all created software tools for consumers to download on to their mobile phones.

Most recently, Argos announced the launch of an iPhone app to take advantage of more consumers using Apple mobile devices to access its website. The application provides a ‘click and collect’ service with over 17,000 products available for in-store reservation.

Getting the basics right is essential when it comes to developing iPhone apps. It seems the best approach for retailers to is to have a full features application where you can browse every section of the web site, every department and product, and physically buy from via the phone.

The majority of them do what it says on the tin – creating a beautiful version of their catalogues on an iPhone, not to mention providing a greener way to distribute a catalogue. Moving forward, brands that are quick to adopt and experiment will deliver consumers exactly what they need.

Clearly not a passing fad, the soaring popularity of the iPhone is set to continue and with more than 150,000 different apps currently available, rarely costing more that a few pounds to download, I’d say the more the merrier!

Our business is all about ideas and energy. So what better theme to base our blog around. You will find here a collection of thoughts, reactions and opinions about the ideas and energy that's inspiring us at the moment.

To find out more about Limelight go to http://www.limelightpr.co.uk